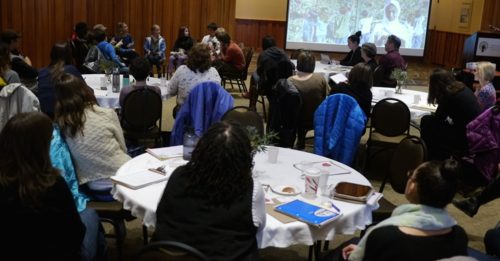 Vicki Vinton reads with Opal School students at the workshop.

In contrast to the structure we’ve followed in previous workshops, this year (2014-15) we decided to have individuals from outside of Opal School play a major role in the series.  We made this decision for a number of reasons: we thought it would illustrate relevant links between participants’ work, Opal School, and national conversations; we wanted to further the resource we play to our larger community; we knew that the visiting presenter would support our staff’s professional growth, drawing our attention to approaches to student learning that we might not otherwise consider.  Lastly, we had been contacted by a number of people whose work we greatly admire who wanted to come to Opal School and we landed on this as a way of satisfying all of these needs.

With this in mind, we quickly decided that Vicki Vinton was one of the people we needed to invite.  Her book, What Readers Really Do: Teaching the Process of Meaning Making, has been an important inspiration to our work – especially in the older grades. Her blog, To Make a Prairie, has been a platform for clearheaded thinking-centered discussion amidst what oftentimes seems a wrongheaded, narrowly skills-based focus. And the time she spent in Reggio Emilia and with Opal School at the 2013 NCTE conference left her eager to spend time with us in Portland.

Preparing for the workshop led Opal staff, as teacher-researchers, into rich inquiry. Vicki is a lover of books – as, indeed, are most of the Opal School staff.  But as we prepared for the workshop, we wondered about what we saw as the role of books in the development of literacy. Vicki shared an anecdote that held significant meaning to many of us. When Vicki’s co-writer, Dorothy Barnhouse, met Peter Johnston at a party, Johnston told her that he thought books were fine – but that the thing he really loved were ideas.[*]  Vicki and Barnhouse were shocked. But in our staff conversations, I think that this may be representative to our approach to supporting children’s literacy – and it may be that paradox that resulted in some of our most profound staff development this week.

Vicki wrote in a recent post that the NCTE sessions she attend last month consistently suggested, “the need for us, as teachers, to focus our work first and foremost on helping students build strong identities as readers, writers and thinkers who are able to raise their voices with confidence, conviction and compassion.” I think that aligns strongly with the mission that drives much of the work that we’re doing here.  The difference, perhaps, is in the emphasis and definition of terms. As we worked on our presentations, we drew on our experiences as well as scholarly resources (Download Selected resources & works cited – reading 1214) to define literacy as referring not only to interpretation of written text but instead all the messages that the reader encounters.  We think that literacy requires people have experiences that lead them to understand that they have something worth saying before caring about what others have to say – through literature or elsewhere.  We see a major role for books in this developing understanding, but I think place them in a different spot in the hierarchy of ideas: I think that we may more often use them as a purposeful springboard for the production of new ideas – as a provocation – rather than emphasizing the reproduction of the ideas that lie within them.[†]  I imagine that the difference comes, at least in part, with our attention to the experience of young children.  In the end, I think, it leads us to a different place – one we’ll continue puzzling over for the foreseeable future.

While reflecting on this valuable workshop, I want to highlight a few of the other big ideas that Vicki shared that I’m looking forward to spending more time with:

She shared that what moved her most in her trip to Reggio was that the schools had an articulated vision of children and how they learn and one of teachers and how they can teach so children can learn. I think I’m always struggling to develop that myself and understand that in relationship to my colleagues at Opal.  I’m always curious to learn more about what those visions are at the different schools and districts we work with.  After all, our image of the child – and the teacher – is where it all begins – and leaving it unarticulated allows deeply seated assumptions to prevail without challenge.

She encouraged teachers to identify which scaffolds are truly helpful and how over-scaffolding damages the learning process and obscures student voice.  That challenge helps me to think about my use of scaffolds and consider the tension: too much?  too little?

She used a quote attributed to Francis Bacon about critical thinking – “a desire to seek, patience to doubt, fondness to meditate, slowness to assert, readiness to consider, carefulness to dispose and set in order; and hatred for every kind of imposture.”  While that may be one familiar to others, it was new to me. That relationship to truth is one I seek to hold in my life with children – and with adults.

Vicki pointed to complexity in text written for young people and related it to the complexity of text they will encounter as older readers. The definition of complexity she evoked seemed a great fit for both our work with children and each other: “Situations where an increasing number of independent variables begin interacting in interdependent and unpredictable ways.”  That describes worlds that I believe children can dive into – that Opal School children have been immersed in – and that I think every child has a right to see themselves as capable of grappling with.

On responding to what she saw during her time at Opal School, both observing the classrooms and hearing the presentations, she said that it left her asking herself, “Is what I’m doing big enough? Am I opening the door wide enough?” I don’t mean to suggest that Opal School gave her answers to these questions – but it led her to ask them.  I think that Opal School exists to provoke these questions. They’re the questions that we’re always asking ourselves.

[*] I’m probably mistelling this.  It’s hearsay – Barnhouse to Vinton to me to you – so I’m probably way off. I hope that this gross misrepresentation leads Peter Johnston to come to Portland to correct the story. His book, Opening Minds, has been wildly important to our thinking. If such misrepresentations will lead to that outcome, expect a lousy anecdote involving Johnston to be posted weekly.

[†] I think that these are really big, radical ideas. I hope I get some pushback in the comments section. As a literate person, I see these ideas as provisional and look forward to developing them with you.

New ground for play and possibility