Thinking about drawing in new ways

Thinking about drawing in new ways

"Drawing belongs to our species as a desire to leave traces."

Last June at the NAREA conference in Portland, I was deeply inspired hearing Vea Vecchi talk about drawing.

I am paraphrasing here because I am not sure I caught every word exactly, but she began by saying…

'Drawing is done all the time, all over the world. It is a language that is not often used in terms of all of its potentials.'

I love drawing. I am not particularly good at it, but I love how it can speak one's ideas so clearly. I also love the challenges it poses. I turn to drawing often in the classroom and have felt at times that maybe I overused it, if that was possible. I wondered if I offered or encouraged drawing too often, that it might become old or dreary.

Vea's words brought drawing to life for me in ways I had never thought about. For one, she spoke of there being many different types of drawing. Though I knew this to some extent, I had never thought of it this broadly. She outlined 7 ways of drawing (and I don't think this was meant to be an exhaustive list), they were:

Drawing that uses metaphor to transform

Vea spoke about the challenges that could come up in drawing and how 'children had to make an invention', because they have to figure out, "How do we use two dimensions to represent a very three dimensional world?'

She continued to share that 'A child has to invent marks and symbols to represent what they are drawing, and she cautioned that, 'We must not give models to the children, but let them solve these problems and challenges.'

Thinking of drawing as a medium for invention makes it such as active experience. It is not the hands doing most of the work, but the brain – making decisions, trying things out, experimenting. It is as much about problem solving﻿ as it is about representing.

'While they draw they are always asking themselves questions.'

The other day in Early K while we were doing our Monday sneak peeks, I was struck by some drawings the children had made. In both of these drawings, the children were working to solve problems because they wanted to draw events from their lives that did not prove to be straightforward to represent in two dimensions. 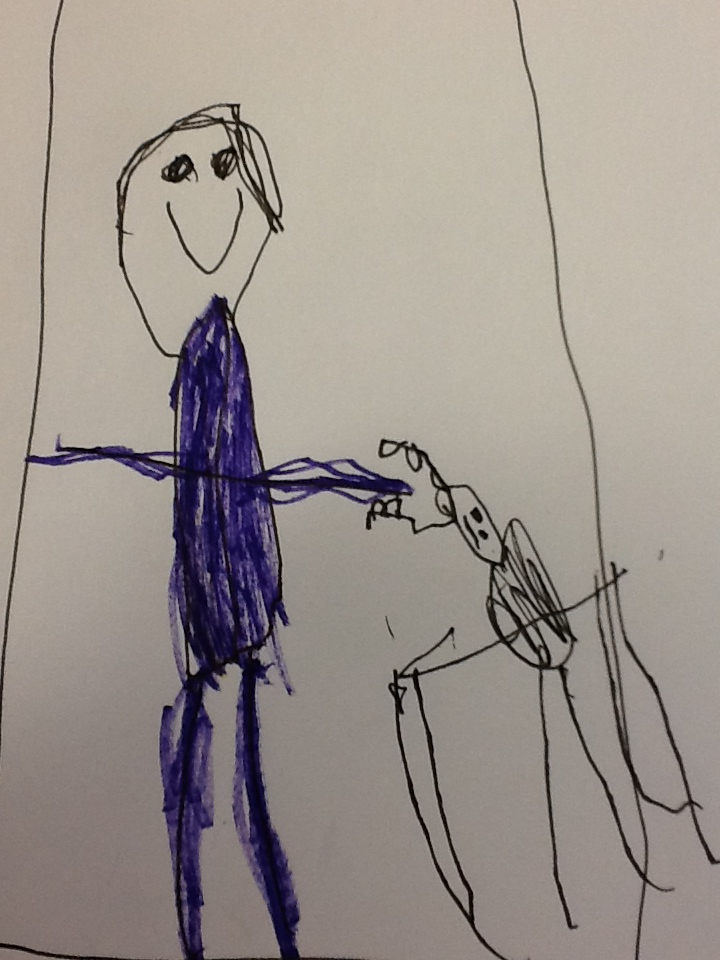 "My puppy is biting my mom's hand."

I noticed H's inventiveness here. Drawing the side view of the puppy was tricky. H drew a front view of his face (which is much more straightforward to draw), but the teeth (the most important part of the story) are a clear side view and are represented very carefully to show the teeth coming down on his mother's hand. 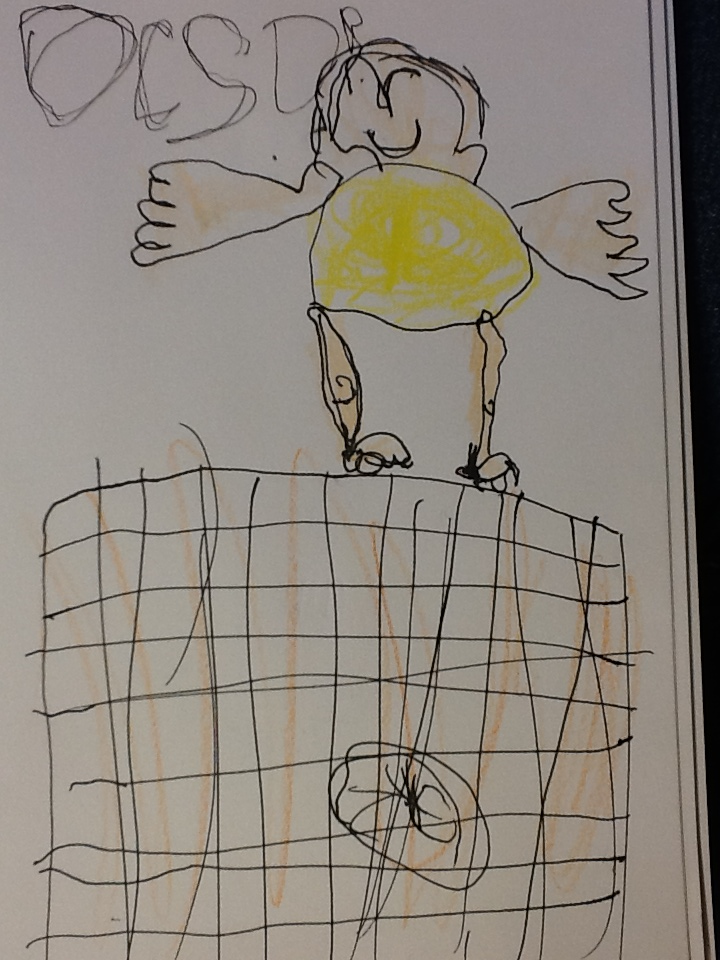 EH wanted to draw herself kicking a soccer ball at a rebounder. She drew the rebounder first which made sense becasue that is what she could see in her memory – it is what she was looking at. But then she could not figure out where to put herself or the ball. She almost gave up and started a different sneak peek, but instead she checked in with a teacher and we were able to discuss this interesting conundrum and think together about some possibilities of how to move forward. The result of her work is above – she drew the soccer ball in the rebounder first, and then drew herself off to the side.

It was unclear if she was satisfied with the result of her attempts and I was curious to challenge her to keep thinking to see if there was another way she could solve the problem of representing a 3 dimensional experience in 2 dimensions.

We got a photo of the rebounder and set up a soccer player and a ball with classroom materials. This allowed her to see the part of herself that would be visible if she were standing in front of the rebounder. This is her next attempt…

We also talked about the act of kicking and how it is something you can see so cearly from a side point of view. She decided she wanted to see if we could get a picture of a side kick to see what her body would look like doing it.

She then used this photo and worked to invent how to draw this on paper as well. (It was all getting a little silly at this point and we captured a karate kick instead of a soccer kick).

These inventions take courage. For EH, at first, it was a real risk. It felt easier to not delve into something that felt hard and confusing. I am thankful that she had the courage and desire to stick with it. I have had children over the years who would shy away from drawing because they did not feel like they were good at it or that their drawings looked like what they wanted them to. If only they could see themselves as drawing scientists, experimenting with possibilities and looking at the 'results' as inventions instead of as good or bad. What language can support that shift – I guess those are the experiments we teachers and parents get to find the courage to try out.